Move over Indiana Jones there is a new adventurer in town! You can have fun wearing this realistic t-shirt design by Michael Cahill. All you'll need is his infamous hat !

Michael's artwork and collaboration with The Mountain® mean you can dress as a Centurian, a Viking or even a Biker!  Why not get festive wearing an Elf Costume to your office Christmas party this year?

All of Michael Cahill's t-shirts can be found at Tam's Treasures and if you love these as much as we do, Michael has been commissioned by The Mountain® to do more.


Michael Cahill originally grew up in Southern California, but his passion for painting, history, mythology, and the exploration of far off places have taken him all over the world. Michael's love of reading anything he could find started at a young age, and through reading he felt compelled to draw and paint the images that his imagination was creating. Inspired by the stories of pirates, great explorers, adventurers, fantasy books, science fiction characters, and everything in between - led him to paint all the time in order to show others what he was seeing.

Jumping forward in time, Michael was at university working on his economics degree, when he was contacted by a small visual FX studio that had seen his artwork and wanted to bring him on board to help with their Visual FX workload. That moment was all it took to change his direction, and Michael never looked back.

Now having spent 20 years working on award winning projects as an Art Director, Illustrator, and Production Designer for some of the biggest media companies in the world (Warner Brothers, Microsoft, and Nintendo) he's begun to branch out into the world of art licensing.
He's first series of paintings to be released by The Mountain are based on his love of personas. Wouldn't it be fascinating to be a Viking, Centurion, Explorer, or even Christmas Elf? His paintings encourage us to have fun with our personas, while also being eye catching and quite the conversation starter.

Currently Michael resides in Queensland, Australia with his family, and when he is not painting - he enjoys surfing, exploring his new homeland, and hanging out on the back deck with his two wild kookaburras.

Some of his current (and upcoming release work) work can be previewed at his website: www.michaelrcahill.com 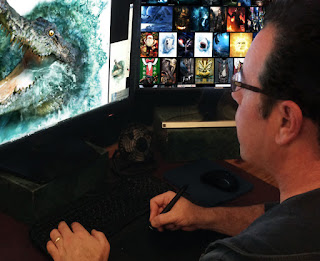 Posted by Tam's Treasures Online at 00:14 No comments: